Khartoum (HAN) August 4, 2014 – Africa’s Infrastructure and Manning Strategic news. China’s rapidly growing presence in Africa has increasingly become a topic for debate in the international media and among economists and policy analysts. While China’s unique economic approach to Africa meets the African countries’ need for funding and infrastructure projects, the model has been widely criticized. 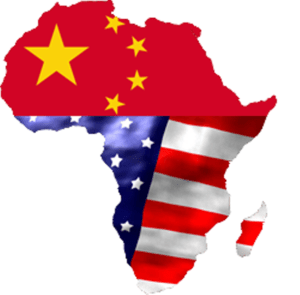 The ‘new scramble for Africa‘, the US, China and other nations are attempting to consolidate their grip on Africa’s natural resources and its growing consumer class.

Empire travels to Kenya, France and the USA to examine who is gaining, who is losing and what it means to Africans.

The Africa’s young population grows wealthier, investing there is becoming both easier and more attractive to America multi-national and international investors.

That strategic narrative is one President Obama promotes this week as he convenes the largest gathering ever of African government officials in Washington, D.C., in an effort to bolster the U.S. relationship with one of the world’s fastest-growing economies. An all-day event Tuesday will focus specifically on business and investing opportunities.

Insurance and infrastructure represent some of the best investing opportunities as companies expand to meet the growing demand of countries that are becoming wealthier and more educated, says Ryan Hoover, founder of Investing in Africa.

“There’s huge demand for energy, roads and water,” he says.”Any companies that have exposure to building or owning or operating power plants are seeing huge gains.”

China model, implemented in Ethiopia: China seeks to satisfy four broad national interests in its relations with the continent. Politically, China seeks Africa’s support for China’s “One China” policy and for its foreign policy agendas in multilateral forums such as the United Nations. Economically, Africa is seen primarily as a source of natural resources and market opportunities to fuel China’s domestic growth. From a security standpoint, the rising presence of Chinese commercial interests in Africa has led to growing security challenges for China, as the safety of Chinese investments and personnel come under threats due to political instability and criminal activities on the ground. Last but not least, China also sees an underlying ideological interest in Africa, as the success of the “China model, implemented now in Ethiopia” in non-democratic African countries offers indirect support for China’s own political ideology and offers evidence that Western democratic ideals are not universal.