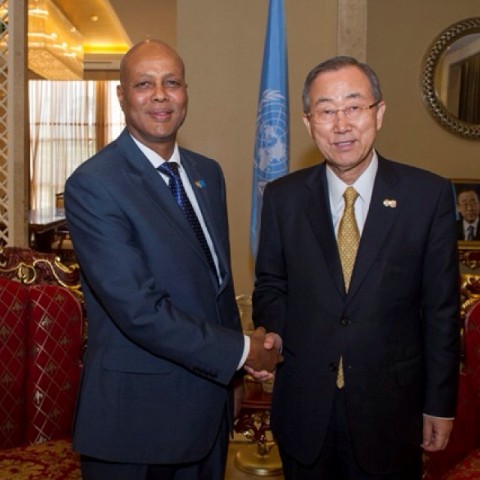 Addis Ababa (HAN) June 27, 2014 – The Horn of Africa Newsline (HAN) Correspondent, Jamal Sheikh Abiib reports that the 23rd Ordinary Summit of the AU opened in Malabo With a Call to Remain Resolute in Pushing the African Agenda for peace, security and Continental stability.

The Special guest to the 23rd AU Summit, President of Spain Moriano Rajoy Brey and UN Secretary General Ban Ki-Moon, both lauded the phenomenal growth of the continent and pledged to play a part in the Africa renaissance.

The Summit commended and welcome back into their fold the Presidents of Egypt, Mali and Guinea Bissau.  The theme of the 23rd AU Summit is: “Agriculture and Food Security in Africa.”
Somalia Prime minister Abdiweli Sheikh Ahmed (photo), with UN Secretary General Ban Ki-Moon at the 23rd AU Summit

The AU Commissioner for Peace and Security, Ambassador Smail Chergui, and the European External Action Service Managing Director for Africa, Nick Westcott. In his statement, Commissioner Chergui expressed AU’s appreciation to the EU for its unwavering support to peace and security efforts in Africa. “We acknowledge the EU’s continued support through the APF to our mission in Somalia (AMISOM), the African-led International Support Mission to the Central Africa Republic (MISCA), as well as support to our efforts against the Lord’s Resistance Army (LRA),” he said.

The 23rd Ordinary Summit of the African Union has opened in Malabo, Equatorial Guinea with a call on the continent to remain resolute in pushing the African agenda and not to bow to foreign dictates.

Speaker after Speaker condemned crisis in Nigeria whilst commending peace efforts in Mali, Guinea Bissau and Egypt. Ghana’s President John Dramani Mahama, is among the about forty-four Heads of States present.
This topic has become crucial considering the fact that 70 percent of the World’s uncultivated arable land is in Africa, yet the continent cannot derive wealth from it.

The African heads of States will dialogue on what can be done to modernize and mechanize Agriculture to make it attractive to the youth and make countries self sufficient in terms of food production.