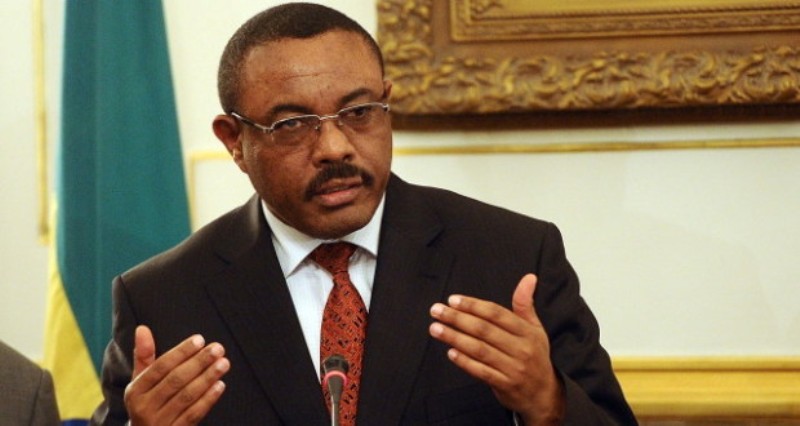 Paris (HAN) May 18, 2014. Regional strategic Interview with Ethiopia Prime Minister Hailemariam Desalegn, conducted By Nicholas Norbrook and Patrick Smith in Paris. According to Professor Nicholas Stern, the Chief Economist and Senior Vice President at the World Bank from 2000-2003,

Meles Zenawi, was one of the world’s and Africa’s most remarkable leaders, Melez was visionary, determined and practical issues that matters to the region, also tough man, in a tough place, ready to take difficult decisions.  If Ethiopia’s growth of GDP had been at the same rate as for sub-Saharan Africa, Ethiopian incomes would have been one-third lower than now. These are remarkable development achievements made by his vision. Zenawi was also an outstanding figure for the horn of Africa and  led for the African Union on many issues and his analytically force. His wisdom and intelligence were greatly valued in the economic, security and environmental councils of the world.

This interview with Prime Minister Hailemariam will discuss Males Zenawi’s lessons learn and legacy on security and development guidance for Ethiopia, Horn of Africa and Africa:

The Africa Report : What lessons do you think France and the West African community can learn from Ethiopia’s experiences in Somalia?

Hailemariam Desalegn: I feel that the intervention of France in Mali has been instrumental and is very important because [without it] at that time it would have been a disaster and there would have been a very bad consequence in terms of the Malian population.

In this regard, I think the request made by France and ECOWAS and the African Union to have a United Nations (UN) force in Mali should be responded to by the UN Security Council as quickly as possible.

Ethiopia was very clear that it wasn’t going to be part of the African Union Mission in Somalia – you wanted your own independent military command. That implies freedom to pursue war. Do you think that’s what’s needed in Mali, a two-track approach?

Only if there are countries that are committed to do so upon the request of the Malian authorities, according to the law of the land. If they ask some countries to intervene to support them, that’s also possible. That’s what we have done in Somalia with the request of the Transitional Federal Government, to support them in the fight against Al-Shabaab.

You have said you want to pull your troops out of Somalia as soon as you can, but there has been trouble in some of the areas you’ve left.

You know, as far as Somalia’s concerned, their agreement was to have different fronts to engage Al-Shabaab. And if Al-Shabaab is dispersed, then they will be weak, and it will be possible to dismantle Al-Shabaab. That mission has been completed. And we waited […] It was difficult to stay there beyond our agreement to withdraw immediately after this mission had been completed.

But for the sake of security we waited for the last nine months. And again we wanted to show the international community that we cannot wait more than nine months paid by our money. It becomes very difficult for a de- veloping country like Ethiopia to pay that long for a military force to stay in some other country. So I think our ambition and our policy is we are not going to leave the fight of Al-Shabaab by any means.

Has there been an attempt to bring more diversity to the leadership of the Ethiopian People’s Revolutionary Democratic Front (EPRDF)?

If you see the Ethiopian leadership composition, it’s always diverse. The diversity issue has been accommodated now and before. So there is no change where diversity is concerned. Because if you take EPRDF as a ruling party, we have an executive committee of 36, and nine from each four regional states and parties.

So you can see that there is equality of representation in the executive committee of the EPRDF. If you also take the federal cabinet, you’ll see that all the regional states and regions are represented. There has not been any change. The only change that has taken place is maybe we have a process of succession that was planned five years ago. That succession is a succession of generation. It’s not individual.

Where is the locus of economic planning in Ethiopia?

If you take an example of the East Asian states, they had leaders with strong vision. The vision of the top leaders matters very much. And then it is up to the technical and professional people to sort out how this vision is going to be materialised in terms of infrastructure, in terms of industrialisation, in terms of agricultural production and organisation.

South Korea and China carefully opened up markets to allow competition to boost efficiency. Do you have a vision for opening up certain markets over the next few decades?

Of course. If our telecoms, bank- ing sector and power sector are government led, it is because we have an economic rationale behind it. Some people say that it’s an ideological rationale, but it’s not true. And if you take all the developed nations […] at the early stage of their development they had never privatised their major commanding heights. When [you] reach this state, they try to tell us, you have to privatise some of the companies immediately, but we are not at this stage at the moment.

Is there an economic rationale for the villagisation programme?

It has both an economic and a social rationale. If you want to have a proper community that will go for cottage industries, you need to have power. You cannot distribute power to scattered homes, two houses here, three houses some- where else […] There is not only an economic rationale, but also the social aspect: you can easily provide health services, education services, drinking water services.

There is a critique of villagisation that the World Bank is looking at at the moment.

It’s ill-founded. It is entirely a voluntary process, otherwise it doesn’t work. Why should we do a process that is not sustainable? You can’t do that because it’s a waste of time, resources and also [brings] suffering for the people. Sources: The Africa Report with  By Nicholas Norbrook and Patrick Smith in Paris.