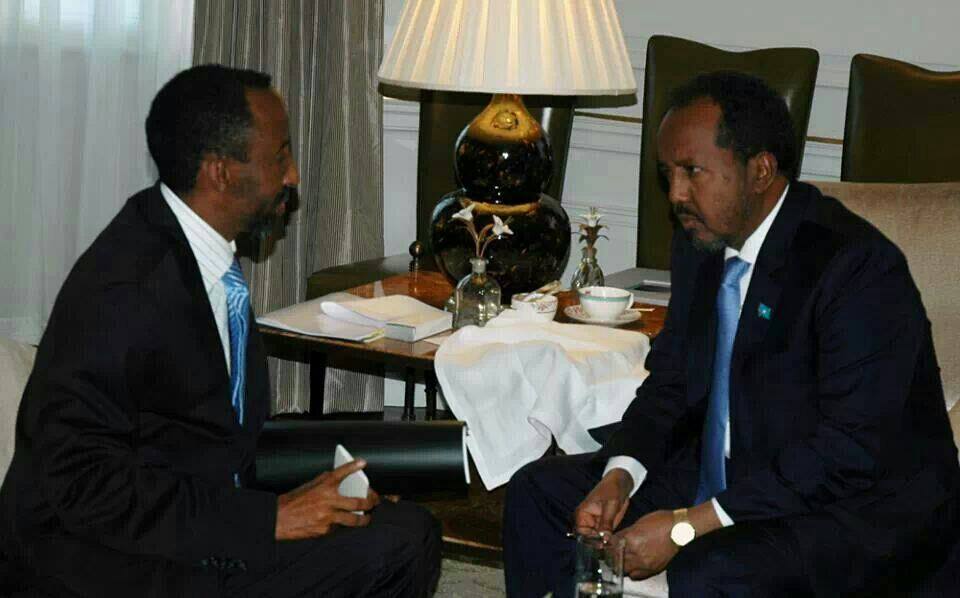 Djibouti (HAN) May 7, 2014. The Speaker of the Federal Parliament of Somalia, Hon. Mohamed Osman Jawari has shown a sheer determination and courage to move the country ahead. Despite the enormous undertakings including leadership challenges and security complications.

Today, More than 133 Somalia Federal lawmakers signed a political statement which called President Hassan Sheikh Mohamoud to resign or face parliamentary vote of no confidence. In a meeting in Mogadishu today, parliamentarians released a press statement which they have noted down 14 points to shed the light the failure of president Mohamoud’s leadership. The statement touched down the ongoing clan-based conflicts in some of the country’s regions of Hiiran, Middle Shabelle and Lower Shabelle which they said was the result of poor leadership and bad governance. The lawmakers called the President to resign immediately or he will face a parliamentary vote of no confidence. “We can not accept to see as this serious matter is going on.” Somali lawmaker Abdukadir Osoble said. He said some parliamentarians went to th president’s office to advise him to resign before they tabled this motion

Reason One,  International community: Somali Prime Minister Abdiweli Sheikh Ahmed has on Monday met with the Assistant Secretary-General for Peace-building Support Judy-Cheng Hopkins and the United Nations Special Envoy to Somalia Nicholas Kay in Mogadishu. The prime minister and the two visiting officials discussed on various issues including the peace process and the fight against al Shabaab rebel group, according to a press release from the office of the prime minister. The officials promised immediate stabilization efforts in the newly recovered areas from al Shabaab militants in south and central Somalia. Ahmed said that he also discussed with the two officials on constitution review process, federalism as well as delivering basic social services to the Somali people in newly liberated areas.

Reason Two: The “Stalemate of Dysfunction” By. Sheiknor A Qassim. “Time and time again, the Somali policy makers can’t decide on the simple framework to move the country forward. The Prov. Fed Gov. is so dysfunctional and incompetent that conflict ideologue is manufactured on a daily basis. Whereas the Prov. Constitution clearly defines the foundation and the guidelines for these “ideologues” to come into terms and deliver much needed Public service. Once again, we are witnessing the collapse of the Executive branch, ironically following the same footprints of the previous failed Transitional Fed. Govs… . INSANITY is to keep repeating the same concept again and again expecting different outcome.

Although International recognition and aid have been slightly positive, public institutions are non-existence, the people house (Parliament) has yet to debate and pass the required creation of the Constitutional Court let alone any measures or legislative matters. It has become an adaptive culture of status quo for these “subjects” to waste, loot and abuse the system.

Therefore, Mr. President, the Stalemate of dysfunction and incompetency must stop, many challenges are ahead of you, conflict and mistakes will always be in the mix, but it takes sound Leadership to mitigate past lessons and move the process forward. “New Beginning” means new direction and exemplary vision, change is possible only… by defining, planning and acting on…the path to Inclusiveness, Peace, and Prosperity. We certainly hope that this time the selection process of the new PM will be functionally different and your statutory powers will be limited to the provisions provided by the Constitution. It’s the rule of Law that guides the Democratic principles NOT the Rule of men.