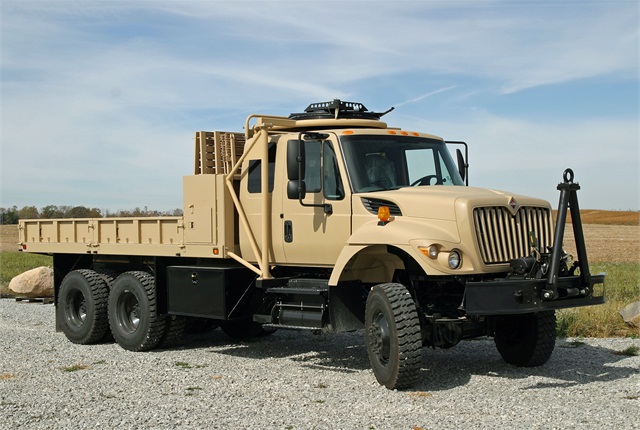 Navistar Defence has been awarded a $26 million contract to supply 6×6 transport and recovery trucks to Somalia, which will receive the vehicles by the end of 2022.

The US Department of Defence on 25 November announced that Navistar had been awarded a $26 748 087 firm-fixed-price Foreign Military Sales contract “for two commercial Medium Tactical Vehicle Variants — the 6×6 General Transport Truck and the 6×6 Wrecker Vehicle Recovery Truck, and spare parts.”

The estimated completion date is 25 November 2022.

According to Navistar, its 7000-MV General Transport Truck (GTT) has been designed for heavy-duty transport although it can be converted to an armoured personnel carrier. The 7000-MV GTT offers a 5-ton off-road capacity and a weapon station that can handle up to 12.7 mm calibre weapons, although standard payload is 13 tons. The GTT has removable seating to transport up to 20 soldiers or cargo – including ISO containers.

The GTT is offered in several variants, including mine and mine countermeasures, water tanker, refueller, dump truck and recovery vehicle.

The Wrecker recovery vehicle can haul 36 tons and was designed as an armoured vehicle recovery vehicle. It allows two- to three-man crews to retrieve damaged or mission-disabled vehicles and carry out other support missions. The Wrecker provides ballistic, mine and Improvised Explosive Devise (IED) protection to its crew through use of a V-shaped hull. A recovery crane is mounted on the rear side of the chassis and a winch is mounted at the front of the vehicle.

The United States provides military aid to help Somalia fight off Islamist insurgents, but this was suspended in December 2017 after the Somali military was unable to account for food and fuel. However, aid resumed in July this year, although on a smaller scale.

The United States has been building up its military presence in Somalia since 2006. In 2015, it was reported to be operating drones and conducting counterterrorism missions from a base at Kismayo Airport. At the end of 2017, there were 500 US military personnel based in Somalia. A particular focus since 2017 has been the development of Camp Baledogle, located at a former Soviet Union airbase in the Lower Shabelle region of southern Somalia, according to research by the Stockholm International Peace Research Institute (SIPRI). The base facilities and capabilities have been updated, including a $12 million upgrade to the runway. Work at the camp is due to be completed in 2019. In 2018, it was reported that six additional military sites were being prepared in Somalia.

The build-up of US forces in Somalia has occurred as attacks against the Islamist group al-Shabab have increased significantly. Camp Baledogle is reportedly the site from which many of these attacks have been launched, alongside ad hoc facilities in Somalia and additional sites in Djibouti. Camp Baledogle is also used to train Somalia’s special forces.