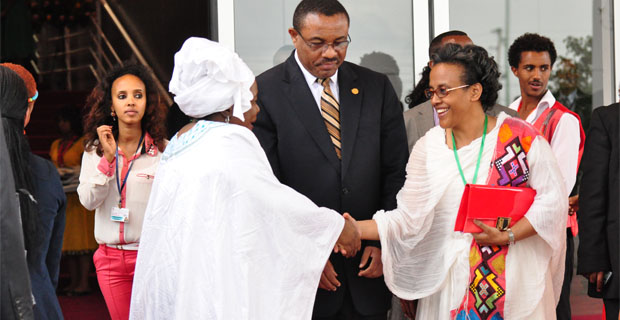 The two leaders discussed the progress made in the response to AIDS in Ethiopia where increasing access to HIV prevention and treatment services among pregnant women living with HIV and children between 2009 and 2013, has meant the number of new HIV infections among children has dropped by 54% and the prevention of mother-to-child HIV transmission coverage reached 50%.

The Ethiopian First Lady is a member of the Organization of African First Ladies against HIV/AIDS and is currently involved in the development of HIV prevention campaigns in Gambella and Benishangul-Gumuz, two of the regions with the highest HIV burden in Ethiopia. She told Mr. Sidibé that joint efforts were needed to redirect interventions towards high-burden regions and geographical hotspots in view of changing the epidemic trends in Ethiopia.

UNAIDS Executive Director Michel Sidibé , who commended the efforts of the First Lady towards the elimination of new HIV infections among children and her commitment to improving the lives of women, young people and children in Ethiopia, stressed the importance of education in reducing the number of new HIV infections, particularly among girls, given the high level of HIV prevalence among women in the country.