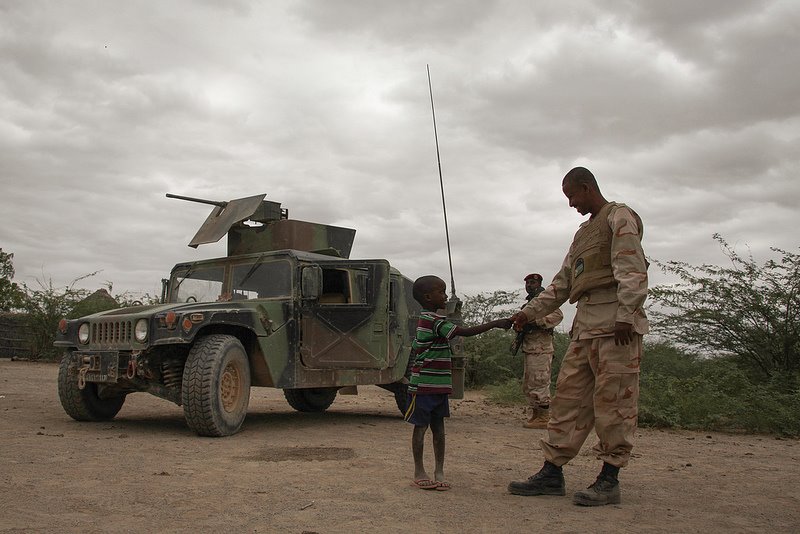 Nairobi (HAN) April 27, 2014, – In Southern Somalia, domestically much of the violence has been spread across the central and the South western regions of Southern Somalia. The Federal Somali government has been seeking ways to deal with Al-Shabaab militant cells returning to Mogadishu rgion. The city has morethan 2 million residents and too  corrupt police, and security forces to deal with crime or terrorism. Efforts to set up an informant network stumbled because of the rampant corruption among police and the general knowledge that police can be bribed by Al-Shabaab supporters to get out of being arrested or to obtain the names of informants.

The UNSC is bringing in trainers, advisors and cash to create a Somali operated logistical capability for the Somali Army. This force currently consists of six brigades and about 7,000 troops actually in service. The ultimate size is to be three times that and without support troops that won’t happen. Corruption and poor discipline remain a major problem and creating a logistical force that will handle purchasing, storing and distributing supplies as well as maintaining equipment will face enormous problems with corruption. Meanwhile the 22,000 foreign peacekeepers provide most of the logistical support for Somali security forces.

The Somali pirates are still in business and there have been five attacks so far this month. The piracy business has changed a lot since 2010, when it reached levels of activity not seen in over a century. But over the next three years that all changed. By 2013 attacks on ships by Somali pirates had declined 95 percent from the 2010 peak. It’s been over two years since the Somali pirates captured a large commercial ship, and even smaller fishing ships and dhows (small local cargo ships of traditional construction) are harder for them to grab. The rapid collapse of the Somali pirates since 2010 was no accident. It was all a matter of organization, international cooperation and innovation. It all began back in 2009 when 80 seafaring nations formed (with the help of a UN resolution) the Contact Group on Piracy off the Coast of Somalia. The most visible aspect of the Contact Group was the organization of an anti-piracy patrol off the Somali coast. This came to consist of over two dozen warships and several dozen manned and unmanned aircraft, as well as support from space satellites and major intelligence and police agencies. Despite all this there are still pirates who are active along the coast.

April 26, 2014: Peacekeepers and Somali security forces continue to chase al Shabaab out of towns and villages from central Somalia (west of Mogadishu) south to the Kenyan border. The al Shabaab gunmen tend to flee, so it’s largely a matter of chasing the Islamic terrorists constantly, leaving them little opportunity to organize attacks. Al Shabaab is forced to forage and loot to survive, which makes them even less tolerable to the locals. There has been some violence, or threats of violence and this has produced over 40,000 refugees. There are also a lot of roads that go through areas where al Shabaab operate and often ambush and rob vehicles. This has made delivery of aid more difficult. There are still over half a million people in the area dependent on food aid. Al Shabaab publically insists that it will fight on, so the peacekeepers are wearing them down to the point where al Shabaab is no longer a major threat. That could take years, as in until the end of the decade. That is what has worked against similar terrorist movements in the past and grinding them down still appears to be the only solution.

In response to a March 31st al Shabaab attack (three bombs) in Kenya the government there immediately began searching buildings in the main Somali neighborhood of the city seeking al Shabaab members and sympathizers. By the next day police had arrested over 650 local Somalis for questioning and so far several thousand have been taken in for interrogation. This brought forth much criticism from the UN and the Arab world. This did not bother the Kenyans who consider the Arabs complicit in the creation and spread of Islamic terrorism. Al Qaeda and other Islamic radical groups came out of Arabia and many wealthy Arabs still support Islamic terrorist groups like al Shabaab. The fact that current al Shabaab leadership contains many Arabs adds to Kenyan animosity towards the Arabs. The UN is considered corrupt and subservient to oil-rich Arab states and Western leftists who glamorize and sympathize with some Islamic radical groups. Ignoring the UN and Arab criticism Kenya has been deporting hundreds of Somalis back to Somalia. Those sent back are the ones found living illegally in Nairobi outside refugee camps. Police believe these illegals are the most likely to be Islamic terrorists or al Shabaab supporters. To add to the problems there is the long-standing animosity between Somalis (who are Moslem and consider themselves “Arab”) and the Kenyans (who are Christian and black Africans, who have long been disdained and abused by Arabs). The crackdown on Somalis in Kenya is popular with most Kenyans but hampered by the corruption. Somalis (even al Shabaab members) with enough cash can buy their way out of detention, arrest or deportation.

April 23, 2014: In Kenya (Nairobi) a car bomb went off outside a police station in a Somali neighborhood, killing two policemen and two civilians.

April 22, 2014:  In Mogadishu two al Shabaab men shot dead a member of parliament. The government agreed to provide better security for senior government officials while al Shabaab has boasted that it will keep on killing key government people. Most of these officials are hiring whatever security they can afford.

April 21, 2014:  In Mogadishu an al Shabaab bomb placed under his car killed one member of parliament and wounded another.

April 18, 2014: In Balad (30 kilometers north of Mogadishu) militiamen of a local pro-government warlord got into a firefight with some national police. There were several casualties before a ceasefire was arranged. Balad was under al Shabaab control until June 2012 and because of a shortage of trained and trustworthy security personnel the government had to make deals with local warlords to keep the peace. These warlords are often uncomfortable around the trained police and army units and their gunmen are undisciplined and unpredictable.

April 17, 2014: Uganda has sent 400 more peacekeepers to Somalia to provide security for UN facilities. These troops received specific training for this duty.

In the south, near the Kenyan border, Kenyan peacekeepers rescued two Kenyan aid workers who were kidnapped in 2011. The two were finally released in March when they agreed to convert to Islam. Al Shabaab was unable to obtain any ransom for the two men and sought to at least get some positive publicity with the “conversion.” The two men were still being watched but found an opportunity to escape when peacekeepers patrolled the area they were in.

April 7, 2014: At the Galkayo airport two UN anti-drug officials were shot dead. It’s unclear who was responsible, although al Shabaab will kill anyone associated with the UN and there many criminal gangs who would murder anti-drug investigators from anywhere.

April 4, 2014: In central Somalia (Gal Hareri) there was a large explosion outside the town and when troops arrived they found three dead al Shabaab men and evidence that wounded victims were removed. The Islamic terrorists were apparently assembling a car bomb when the explosives went off by accident. This sort of thing is becoming more common as experienced bomb builders are killed, captured or flee the region because of the constant pressure from peacekeepers and security forces.