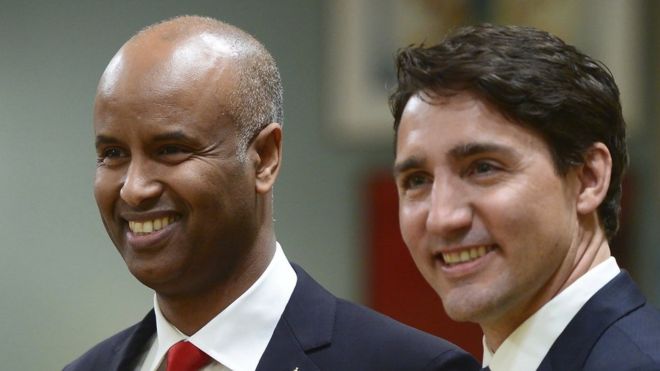 Ahmed Hussen came to Canada from Somalia as a refugee. Now he’s the country’s newest minister of immigration.

Along with thousands of compatriots, Ahmed Hussen fled war-ravaged Somalia for a better life in Canada.

Hussen’s journey took him from Mogadishu to Toronto and then on to Ottawa’s Parliament Hill, where the former Somali refugee was named this week as the country’s newest minister of immigration in a reshuffle of Prime Minister Justin Trudeau’s Cabinet.

It was a fast political rise for the rookie politician, and will put Hussen, who arrived in Canada in 1993 as a 16-year-old teenager, in charge of the complex portfolio that oversees who is welcomed into the country.

Friends say the lawyer and social activist will be able to draw from personal experience in his new role.

Mahamad Accord, who has known Hussen for years through his work with the Canadian Somali Congress, says his friend has not forgotten his modest roots despite walking Canada’s corridors of power.

“He didn’t change,” he says. “The people around him changed.”

Accord recalls Hussen offering him help a few years back. The Somali community in the provinces of Ontario and Alberta were struggling to tackle the deaths of dozens of young Somali men due to drug and gun violence.

He says Hussen did not shy away from speaking openly about the problems plaguing the Somali community in Canada, from high rates of poverty and unemployment to gang involvement.

But Hussen was also aware of how the community could be stigmatised, and was always careful in how he spoke and presented himself. Accord says his friend would tell him “we need to change people’s perception of us”.

“He expects high standards,” he says.

Accord admits he was sometimes jealous of the lawyer and social activist’s ability to diplomatically get across a difficult message.

It was that ability that struck former Ontario politician George Smitherman when he first met Hussen in 1999. Hussen was then fighting for the interest of Regent Park, a multi-ethnic downtown neighbourhood where he had settled with one of his brothers upon his arrival in Canada.

In 2015, he told the Toronto Star that a backlog in refugee applications for permanent residency at the time meant he could not qualify for a student loan. Living in the public housing allowed him to save enough to go to university.

Some long time residents had to move out of their homes during the redevelopment and were fearful they would not be able to return; Hussen worked to ensure their interests were protected.

“There was an extraordinary tension because there was distrust and concerns among tenants,” recalls Smitherman. “Ahmed had to very carefully but forcefully represent their interests.”

“He was someone who spoke with a calmness and an informed knowledge and a maturity that defied his circumstances, both as someone who was young and someone who had taken this awesomely courageous step of leaving Africa for Canada.”

Mr Hussen swept his Toronto riding in November 2015, though he drew criticism for not living in the disadvantaged riding he was elected to represent.

Speaking last April in the House of Commons, he raised concerns about the recent drowning death of hundreds of migrants from Somalia and the Horn of Africa, saying: “Asylum seekers are not criminals, they are human beings in need of protection and assistance and deserving of our respect”.

Smitherman sees Hussen’s background as both an asset and a possible disadvantage in the challenging portfolio.

“It sets up for tensions also as expectations are increased,” he says.

Following his swearing-in, Mr Hussen, a father of three boys, told media he was “extremely proud of our country’s history as a place of asylum, a place that opens its doors and hearts to new immigrants and refugees”.

Hussen has always referred to himself as a Canadian first and Somali second, says Accord. In 2015 Mr Hussen told the Canadian Broadcasting Corporation that he does not want to be labeled a “Somali MP”.

“I’m a Canadian. Somali is my heritage and I’m proud of my heritage but I have a lot to contribute to Canada. And I’m a mainstream guy. I’m not limited by my community,” he said.

Hussen replaces John McCallum, a veteran politician who is going to become Canada’s envoy to China after managing Trudeau government efforts to bring in over 39,000 Syrian refugees in the last 13 months.

“The real message of the new appointment is that the government wishes to profile refuges as a more salient part of our immigration program,’ says Jeffrey Reitz, a University of Toronto sociology professor.

“But it does raise the question of the mainstream immigration program,” he says.

The rookie minister will face challenges in the key, and rarely uncontroversial, portfolio.

McCallum recently introduced contentious changes to Canada’s popular family reunification program, replacing a first-come, first-serve process with a lottery system to randomly choose 10,000 people who filled out initial applications to express interest. Critics say that reuniting families should not depend on luck of the draw.

Another recent decision to scrap a rule limiting how long foreign workers can stay in Canada is being targeted by the opposition as potentially harmful to the country’s work force in the long run. Immigrant rights groups have been critical of the program, arguing the workers under the program are vulnerable to abuse by employers.

He will also have to defend a recent Liberal decision to significantly reduce the number of private sponsorship applications for Syrian and Iraqi refugees because of a current backlog.

Canada plans to bring in 300,000 immigrants in 2017, the majority of them economic immigrants.