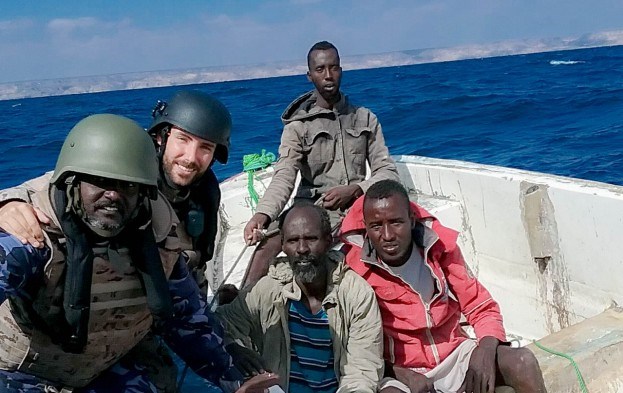 MOGADISHU (HAN) January 8.2017 Public Diplomacy & Regional Security News. Earlier this week, during her counter-piracy patrols close to the coast of Somalia, EU Naval Force warship, ESPS Relampago, met local Somali fishermen at sea.
After greeting them via an interpreter, ESPS Relampago sailors talked about the EU Naval Force’s important role to protect World Food Programme (WFP) vessel, MSM Douro, which is currently tasked to deliver humanitarian aid to the people of Somalia, from any pirate attacks. Counter-piracy patrols off the coast are also carried out to deter any would-be pirates from coming out to sea to attack ships.

Since the European Union launched Operation Atalanta in December 2008, 100% of WFP vessels have arrived safely in Somalia and over one million tonnes of aid has been distributed to the Somali people.

Friendly approaches with local fishermen, such as this, help to build mutual trust and understanding between counter-piracy naval forces and the local Somali community.