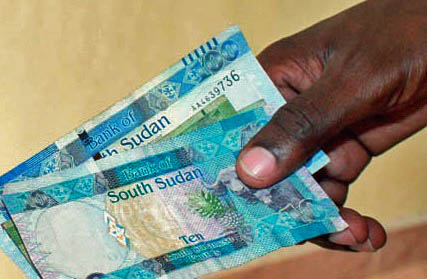 A number of traders Sudan Tribune interviewed attributed weakening of the SSP to increased demands from families abroad and the scarcity of hard currencies.

“People are sending more [U.S] dollars to their families in Uganda and Kenya and this has place a huge pressure on the black market and currency traders are maximizing their profits,” said John Ladu, a trader dealing in money exchange in the South Sudan capital, Juba.

“I have received more than ten phone calls since morning from my clients who are asking me to reserve them some dollars so that they can send to their families for school fees and house rental charges,” said Majok.

South Sudan depends on export of crude oil for hard currency, but production has declined substantially since conflict erupted three years ago. The continuous decline in oil prices in global markets has further reduced monthly revenues for the young nation.

The rate has doubled several times, prompting a surge in commodities prices.

The recent weakening of SSP against the dollar, experts say, could also be attributed to high spending during Christmas and End of the Year shopping and lack of auctioning for dollars by South Sudan’s Central Bank.