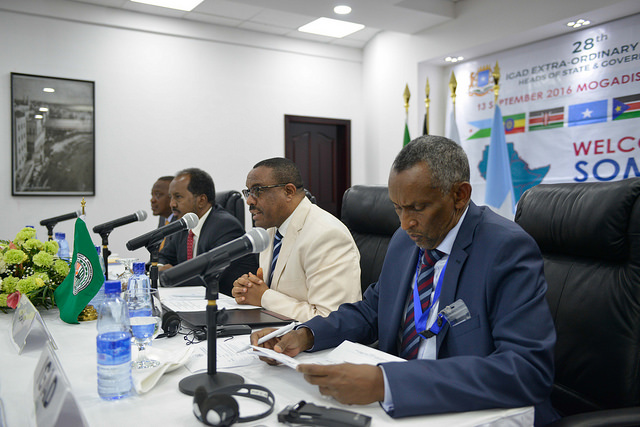 The country, which remained lawless for the past 25 years, has turned a new page on its past as it hosted the 28th Extraordinary Summit of the IGAD Heads of State and Government. The Summit was held September 13, 2016 in Mogadishu, Somalia, under the Chairmanship of Prime Minister Hailemariam Dessalegn who is also Current Chairperson of IGAD

The IGAD leaders discussed the progress achieved in terms of ensuring security and stability in Somalia and received updates on the implementation of the 2016 electoral process._

The Special Envoy recalled Ethiopia’s firm commitment in assisting peace efforts in Somalia, which came uninterrupted even when the world disregarded the situation in that country.

Ethiopia paid dearly to the current positive development on peace and stability in the country which bears a special meaning for Ethiopia, the diplomat said.

According to Ambassador Wondimu Asaminew, Ethiopia’s Ambassador to Somalia, the government of Somalia is now controlling the capital and many parts of the country owing to the role being played by Ethiopia.

Ambassador Wondimu said apart from military cooperation, Ethiopia and neighboring Somalia are now working in other areas including education as many Somali students are pursuing higher education in Ethiopia.

The two countries are now in a new phase of partnership, the Ambassador said.

Somali President Hassan Sheikh Mohamoud repeatedly mentioned the leading role of Ethiopia in ensuring peace and stability in the country.

The IGAD Chair during the Summit assured Somalia of Ethiopia’s continued support throughout the 2016 election and afterwards.