Home Ethiopia GONDAR ON LOCKDOWN ON ACCOUNT OF STAY-HOME PROTEST 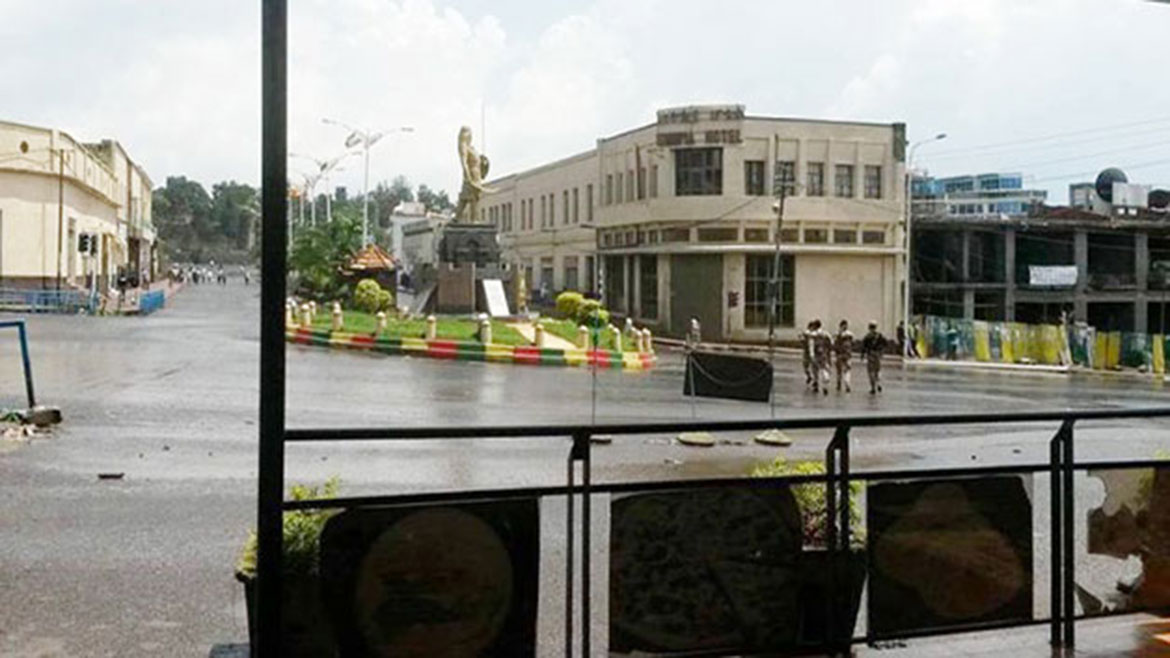 Regional government admits business is down

Amid the continued protest and unrest in the Amhara Regional State, mainly in the town of Gondar and its surroundings, which has now turned into a stay-home protest as a gesture of civil disobedience, all private, government and other institutions in the town of Gonder are reported to be in a complete shutdown, according to eye witnesses and regional government officials.

The only functional institutions currently at their regular operation are the town’s main referral hospital and a few health stations, The Reporter has learnt.

According to unconfirmed reports, due to the month long protest, which was followed by another round of civil disobedience, regular flights have been interrupted around the end of the week. Nevertheless, The Reporter’sattempts to confirm the interruption of flights from Ethiopian Airlines was not fruitful until press time Friday evening.

The stay-home protests are currently taking place in Gondar and in some parts of Bahir Dar. But as of Thursday, a wave of protester and unrest has been observed in Finote Selam and Bure, towns in West Gojam Zone of the Amhara Regional State, becoming the latest regions to join the mood of protest in the regional state.

According to the information The Reporter gathered from various sources, banks, ticket offices, market places, education centers including Gondar University, transport offices, and most government institutions appear to be empty because of the absence of their employees, which encouraged them to suspend operation.

Transport services are also stifled since the start of the second-round of the civil disobedience campaign, which began on Wednesday.

Cessation of transport services has also made Gondar inaccessible to civilian travelers whether coming in or going out of the town.

On the road from Gondar to Azzezo, a town in the vicinity of Gondar, where Tewodros II Airport is located, there was no vehicle transportation service which in turned is hampering flight services coming and leaving the town.

In a press conference that was called on Thursday, Gedu Andargachew, president of regional state, said that the protest is crippling the town’s day-to-day business activities. He also said that the town’s economic activity has been devastated by the ongoing unrest.

It was also learnt that the town is suffering from dramatic decline in tourist flow. The historical town is known to be one of the top tourist destinations in the country. However, the worsening security conditions have deterred both foreign and local tourists from coming to Gondar in the process affecting the business of hotels and restaurants. According to some business owners who spoke to The Reporter, let alone foreign tourist, local customers are not visiting these local establishments due to the protest.

However, Gedu said that the government has decided that such condition should not be allowed to continue further. He also added that an agreement has also been reached between the Amhara National Democratic Front (ANDM) and the other Ethiopian Peoples’ Revolutionary Democratic Front (EPRDF) member parties to get the situation contained until the town resumes its normal functions and order is restored.

In a related move, the region’s Bureau of Trade and Industry Market Development has announced that it has shut down an unspecified number of business institutions, cafeterias, restaurants and other mass service giving organizations and revoked their business licenses after what the bureau expressed as refusal to do what they have been established to do. Similarly, the bureau indicated that some agricultural products experienced higher price hikes during the protests in Gondar.