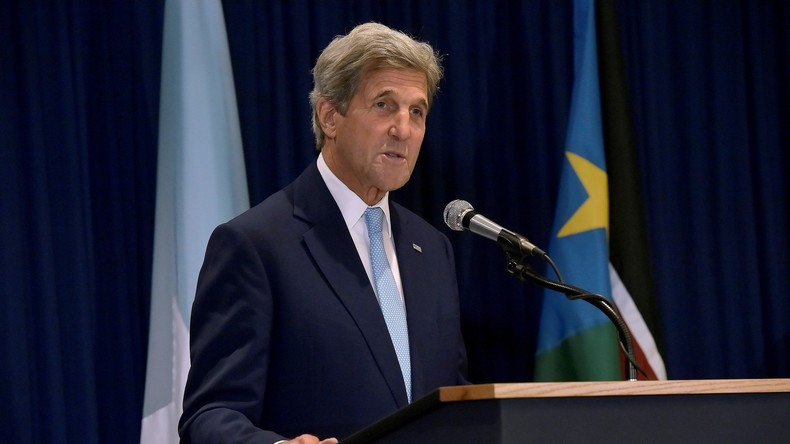 Speaking to reporters after meeting five foreign ministers of Kenya, Uganda, South Sudan, Sudan and Somalia Kerry said the US backed protection force has limited definition and scope with respect to restoring peace in the country.

“With respect to Machar, it’s not up to the United States; it’s up to the leaders of South Sudan and the people of South Sudan and the political parties and the political process, and their neighbors, to weigh in on what is best or not best with respect to Machar,” said Kerry when asked by a reporter to comment on the controversial replacement of the armed opposition leader and former South Sudanese First Vice President, Riek Machar.

He said the process leading to Machar’s replacement with Gai has not broken any law.

“I think it’s quite clear that legally, under the agreement, there is allowance for the replacement in a transition of personnel, and that has been effected with the appointment of a new vice president. And what they decide to do is going to be dependent on them in the context of the implementation of the peace agreement,” he added. Gai was appointed by section of the SPLM IO leaders in Juba in July after Machar fled the South Sudanese capital following four days of fighting between his forces and those loyal to President Salva Kiir.

The United Nations Security Council passed a U.S drafted resolution early this month to send a strong 4,000 protection force to Juba to boast UN peacekeepers in the country with a new mandate to response forcefully to any anti-peace elements in the government or armed opposition.

“But the hope is that with a transitional government that is now committed to the full implementation of the peace agreement and that has already begun to implement that peace agreement, that a force with a presence in Juba itself, which is where most of the violence took place during the last round, will be able to guarantee access for everybody, and that includes people trying to prevent the violence,” he added.

According to the UNSC, the protection force will be deployed in Juba by September 15. South Sudanese government said it has not made a decision to reject or accept the extra force that will increase UN Mission in South Sudan (UNMISS) to 17,000 troops. (ST)