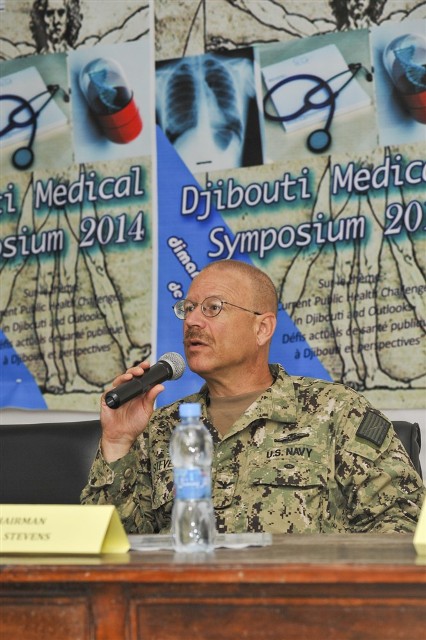 “I think the major significance was we got a chance to talk to our Djiboutian counterparts and learn from them,” said Stevens, CJTF-HOA force surgeon. “We learned what their medical issues are in Djibouti, specifically updates on the malaria outbreak, but also to get an idea of what medical practices are like.”

Malaria has been a big concern for Djiboutian citizens, and the group discussed ways to combat malaria, such as bed nets. However, Stevens said the key to fighting the battle is “vector surveillance,” which means finding the areas of the city where the illness and breeding is the most prevalent. Those are the primary target areas for anti-mosquito efforts.

The symposium also addressed health issues beyond malaria. Stevens talked to the group about triage and the importance of categorizing patients after a mass casualty event, which means treating those with most severe injuries first.

According to Webster, it’s important for CJTF-HOA to stay involved. “(It) keeps us engaged with the local medical population and medical intelligence,” he said.

Stevens said he hoped the symposium will enable medical improvements in the near future and looks forward to more events to stay in tune with the medical situation in Djibouti.

CJTF-HOA – U.S. Navy Capt. Rom Stevens answers a question following his presentation at the 2014 Djibouti Medical Symposium at the University of Djibouti.
–
Speaking Freely is an Geeska Afrika Online and Horn of Africa Newsline (HAN) feature that allows guest writers to have their say. if you are interested in contributing or sending News, Views and Comments. Please email at: han@geeskaafrika.com