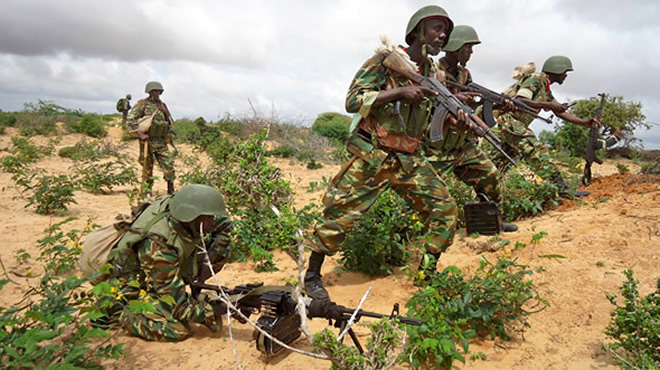 Kenya Defence Forces (KDF) spokesman David Obonyo said in a statement troops had killed four militants believed to belong to the Islamist group during a clash near a military camp in Lamu County in the country’s east. A soldier was also wounded.

“The troops had been in hot pursuit of the al Shabaab terrorists after they conducted a probing attack on a KDF camp in Mangai, Lamu County yesterday evening,” the statement said.

He said that with the bodies they recovered a rocket-propelled grenade, two hand grenades, four AK47 rifles and an improvised explosive device.

In a separate incident in the coastal resort of Malindi, police killed a suspected al Shabaab member and arrested two of his accomplices.

“The suspect who was shot dead fired at our officers first and injured one of them, who is undergoing treatment,” Malindi area police chief Matau Mushangi told reporters.

He said counter-terrorism officers had raided a house where the suspects were hiding following a tip-off.

“The suspects had been recruiting for al Shabaab and were preparing to return to Somalia,” Mushangi said.

Police recovered a shotgun, revolver, 18 national identity cards of people he said he believed the suspects had recruited, and over 20 passports.