Home frontpage Ethiopians speak out against their regime 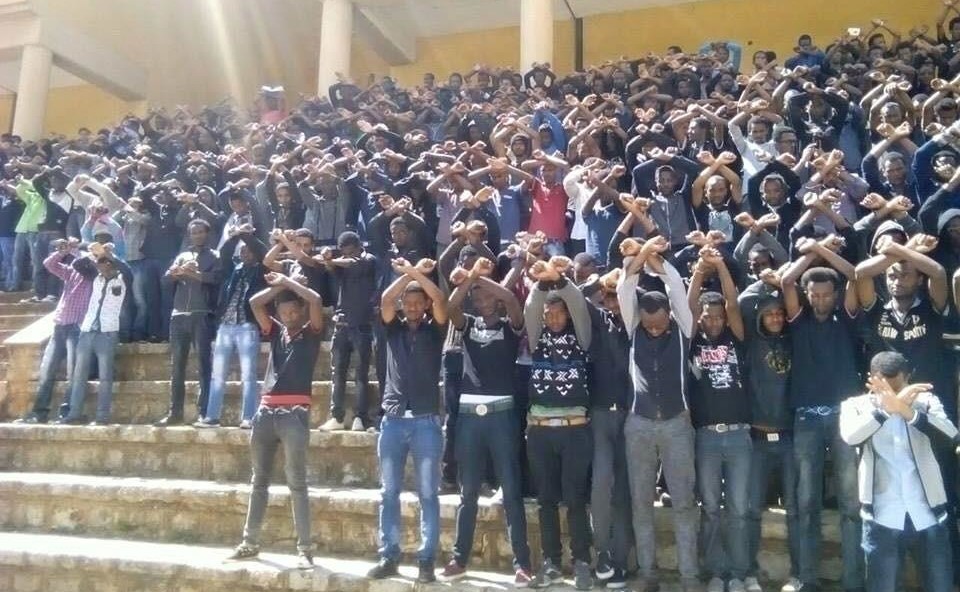 NAIROBI (HAN) June 4.2016. Public Diplomacy & Regional Security News. Over five hundred Ethiopians of different ethnic groups gathered in Nairobi to discuss the human rights violations in their country. The discussions coincided with 25th anniversary of the fall of Mengistu regime.

The Ethiopians who attended the three-hour debate included members of the Oromo people who are opposed to the government’s plan to expand the capital Addis Ababa. They say it amounts to land grabbing. Late last year, violence and chaos gripped Ethiopia as thousands of demonstrators took to the streets in protest against the expansion plan. Human Rights Watch said more than a hundred people were killed in a bloody crackdown by heavily armed security forces. The demonstrations spread to several towns since November.

On Thursday, participants described the suffering of marginalized groups in Ethiopia and accused the government of persistently abusing their human rights.

According to Ebba Abba Murti, the public relations officer for the Oromo refugee community in Kenya, the debate aimed at drawing the international community’s attention to what is happening in Ethiopia. “This is about inhumane treatment of the Oromos from their ancestral land. Prisons in Ethiopia are full of Oromos,” Murti said. “We want the international community to act on it and to put the Ethiopian government to task and to condemn the injustices our people face,” he added. The Oromos, a population of over 50 million people, claim to be the largest tribe in East Africa.

Will the government hear the Oromos’ outcry?

After months of protests with many demonstrators losing their lives, the highly controversial so-called Addis Ababa master plan has been shelved for the time being.

Ethiopians have pleaded to international community to put pressure on the government of Prime, Minister Hailemariam Desalegn, (R) to stop abuses

According to DW’s head of Amharic service, Ludger Schadomsky, the shelving of Addis Ababa expansion calmed down the protests, but members of the Oromo ethnic group feel that they were marginalized despite constituting the largest ethnic group in the country. “This conflict is not likely to go away anytime soon. Particularly students in Oromia universities continue to be very restive,” Schadomsky said.

The fall of the Derg

The debate coincided with the 25th anniversary of the fall of the brutal Mengistu regime, also known as the Derg, and the coming to power of the ruling Ethiopian Peoples’ Revolutionary Democratic Front (EPRDF) in 1991.

Mengistu Haile Mariam is a former Ethiopian military ruler who lives in exile in Zimbabwe. He was the most prominent officer of the Derg, the Communist military junta that governed Ethiopia from 1974 to 1987. From 1987 to 1991, Mengistu was the President of the People’s Democratic Republic of Ethiopia.

According to Schadomsky, also an expert on Ethiopia, the downfall of the Mengistu regime was greeted with great joy at that time. 25 years down the line, Ethiopians enjoy more civil liberties.

Nevertheless, young people feel betrayed by the ruling EPRDF government as it continues to narrow the political space in the country and crackdown on even moderate dissent. “With a huge number of unemployed youths, Ethiopia today feels like a pressure cooker that is about to blow its lid,” Schadomsky said.

Amnesty International’s director for East Africa, Muthoni Wanyeki, said there’s a long way to go in terms of respect for human rights in Ethiopia. And his colleague, Mariam Idriss added that “human rights violations are not supposed to be looked down upon,” Idriss said. “It is upon the role of every state to take into consideration the rights and privileges that people are entitled to.” he added.

Oromia is Ethiopia’s largest region, and many there believe the government did not want to redevelop services and roads, but that it was engaged in a land grab.