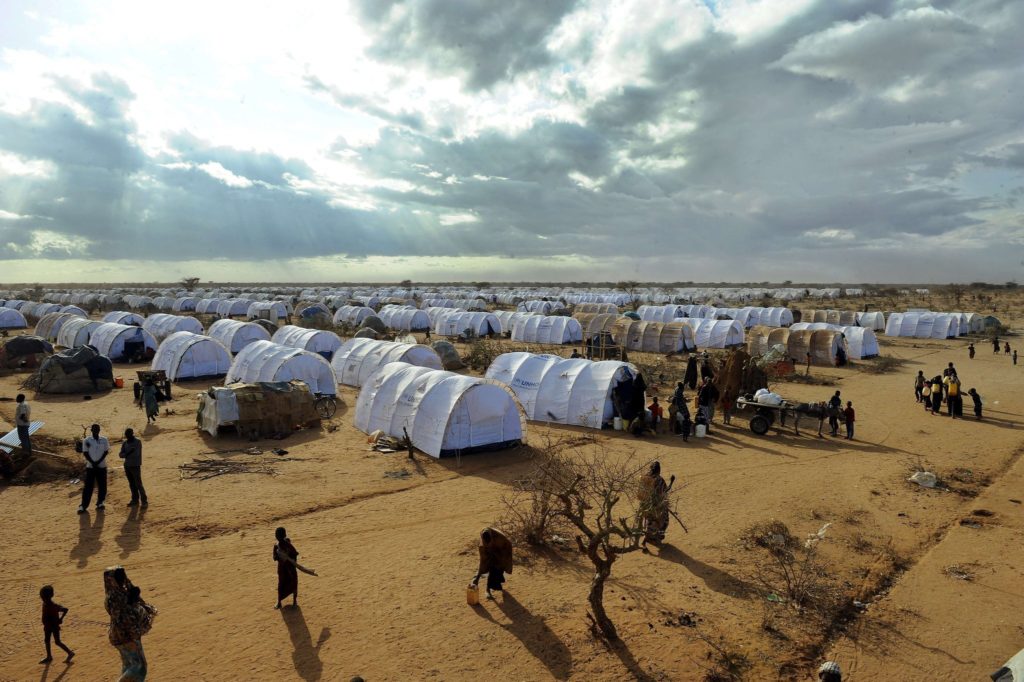 NAIROBI (HAN) May 25.2016. Public Diplomacy & Regional Security News.BY: SAMAR AL-BULUSHI. Earlier this month, the Kenyan Interior Ministry declared its intent to shut down the country’s refugee camps, citing concerns about security and the threat of terrorism. The last time the government indicated its plan to close the camps in April 2015, U.S. Secretary of State John Kerry announced $45 million in additional aid, and the camps remained open.

This time, policymakers and domestic and international rights activists have noted with grave concern Kenya’s recent revocation of prima facie refugee status for Somalis, who constitute two-thirds of the nearly 600,000 refugees in Kenya. This change means that those fleeing Somalia will need to apply for refugee status on a case by case basis—made more complicated by the decision to shut down the Department of Refugee Affairs—and in the interim, they will be subject to removal and abuse by security forces.

Commentators have pointed out that the Kenyan government has never substantiated its claims that refugees were responsible for violent attacks in the country. Instead, they argue that the government is using the refugee population as a diversionary tactic domestically, and as a bargaining chip for more aid from humanitarian institutions internationally. As European states are now willing to pay for other governments to assume the burden of hosting refugees, Kenya seems to be positioning itself not simply to attract more funds, but also to challenge the moral authority of Western states when it comes to international obligations.

Integrally tied to this pending humanitarian crisis is the global architecture of counter-terrorism. The Kenyan government is but one actor among many who produce, and profit from, the specter of terrorist threat, which allows for the discursive slippage from civilian, to potential Al-Shabaab sympathizer, to potential terrorist. Readers unfamiliar with the region are led to believe that ‘Kenya’ is an inward-looking political entity with little connection to the situations in neighboring states, beyond its position as the recipient of refugees. The ‘international community’—led by the world’s most powerful states—is viewed only through the prism of aid, with little consideration of these actors’ own role in exacerbating, rather than mitigating the very violence leading to displacement in the first place. Viewed through this polarizing lens of ‘Kenya’ vs. the ‘international community,’ we fail to grapple with the array of conflicting cross-border interests and entanglements at play, and to contextualize the dilemma as it unfolds.

In 2009, the Kenyan government initiated plans to create a buffer zone between Kenya and Somalia. Working closely with both the Ethiopian and Somali governments, Kenya recruited roughly 2,500 youthboth from within Somalia and from north-eastern Kenya, including Dadaab refugee camp. Luring them with false promises of financial remuneration, this militia was trained for a possible assault on Al-Shabaab controlled areas in southern Somalia. Yet disputes soon unfolded between Kenya and Somalia about where to deploy these forces, confirming the range of interests at play. The whereabouts of these young men remains unknown, raising important questions about the mobilization of armed actors for the objective of ‘counter-terrorism.’

Yet this number pales in comparison to the nearly 22,000 troops now occupying Somali territory as part of an internationally funded ‘peacekeeping’ operation. Formed in 2007 following the US-backed Ethiopian-led invasion of Somalia, the African Union Peacekeeping Mission for Somalia (AMISOM) troops hail from Burundi, Djibouti, Ethiopia, Kenya, and Uganda, with police contingents from Nigeria and Ghana. AMISOM receives logistical and financial support from the UN, and is funded primarily by the EU, US, UK, Japan, Norway, and Canada.

Few analysts have inquired about the violence and displacement generated by the introduction of these armed ‘peacekeepers,’ despite the publication of UN and other reports documenting such effects. In 2014, for example, Human Rights Watch reported that AMISOM troops abused their authority by preying on women and girls, who constitute the majority of those displaced by violence. Rather than weaken Al-Shabaab, the UN Monitoring Group Report observed in October 2015 that offensive military operations by AMISOM and Somali security forces have exacerbated insecurity. The rush by various actors to capture resources in the wake of territorial gain has threatened to undermine peace and state-building efforts, while the territorial displacement of Al-Shabaab from major urban centers “has prompted its further spread into the broader Horn of Africa region.”

African Union troops are not the only actors shaping dynamics in Somalia. Private security firms operate largely with impunity despite documented abuses. In 2015, the UN Special Representative for Children in Armed Conflict expressed concerns about the unlawful detention of children, reportedly formerly associated with armed groups, in a ‘rehabilitation’ camp run by the Serendi Group in Mogadishu. And in March 2016, the US military launched a drone strike that killed 150 people, citing Al-Shabaab plans to attack both US and African Union forces.  While US officials insist that the precision of these airstrikes ensure minimum civilian casualties, the Intercept recently reported that the US possesses limited intelligence capabilities in Somalia to confirm that the people killed are indeed the intended targets. Between AMISOM and private security abuses, and the growing use of drone strikes, Somalis may not necessarily feel more secure in the hands of foreign armed actors than they do in the hands of local ones. And as those who have documented the conditions inside Kenya’s refugee campshave indicated, we should perhaps think twice about calls by humanitarian agencies to simply maintain the status quo.

But Somali experiences and perceptions are of little interest to the more powerful external players who make daily calculations about how to justify their continued role.

As Alex de Waal observed in his recent book, The Real Politics of the Horn of Africa, the ‘war on terror’ has enabled “an exceptionally well-financed rentier-political-security market with the added bonus that counter-terror patronage also comes with intelligence technologies and a legal vocabulary that is perfectly suited for justifying secrecy and repression.” Former Somali Special Envoy to the U.S. Abukar Arman uses the term ‘predatory capitalism’ to describe the hidden economic deals that accompany state-building efforts, as ‘capacity-building’ programs serve as a cover for oil and gas companies to obtain exploration and drilling rights, and as senior military officials profit from the illicit cross-border trade in sugar and charcoal.

Cognizant of the potential for critical questions about their own role in ongoing instability in Somalia, the AU and UN have employed consulting firms to ensure that we, as outside observers, continue to conceive of only a select few actors (Al-Shabaab) as part of the problem, with others (UN, AU, peacekeepers, donor states, and private firms) painted as entirely outside the frame and therefore best-placed to offer solutions.

Recent developments have led to the temporary placement of the Kenyan government in the ‘problem’ category. But rather than conceive of humanitarian agencies and the ‘international community’ on one end and the Kenyan state on the other, perhaps it is time to think more critically about their entanglement. As governance in the name of humanity becomes intertwined with the violence of ‘security,’ it becomes less and less clear what ‘humanity’ is. Simply insisting that the refugee camps in Kenya remain open distracts us from more difficult but important considerations: namely, the ongoing participation of an ‘international community’ that includes Kenya in the production and reproduction of violence in the region.