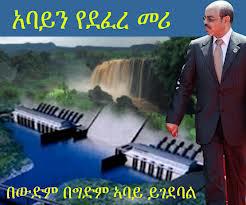 Addis Ababa (HAN) March 20th 2014 – William Davison in Addis Ababa- Ethiopia will begin generating electricity within 18 months from what will be Africa’s largest power plant, the government said. The sale of 7.1 billion birr ($367 million) of bonds over the past three years to domestic investors, has contributed to the 27 billion birr spent so far on the 75.5 billion birr Grand Ethiopian Renaissance Dam project, said Zadig Abraha, deputy general director of the GERD national coordination office. The central bank in April 2011 ordered banks to buy government bonds equivalent to 27 percent of their loans to help fund infrastructure projects.

Ethiopia’s funding of the 6,000-megawatt hydropower project represents “the golden age of our history as far as economic development and public participation is concerned,” Zadig said by phone on March 18 from the capital, Addis Ababa. “If we’re to meet the power demand we have to construct these mega projects.”

Africa’s second-most populous country after Nigeria is boosting electricity output to cater for increased demand as economic growth surges. The economy expanded at an average 9.3 percent over the past four years and the government is targeting growth of more than 10 percent, which may lead to annual increases in electricity demand of as much as 35 percent, Zadig said.

An increase in Ethiopia’s current generating capacity of 2,000 megawatts will also allow the country to reduce a trade deficit of $8.5 billion last year by selling excess electricity.

The government already exports power to Sudan and Djibouti. It’s also building a transmission line to Kenya and is in discussions with Yemen and war-torn South Sudan, Zadig said. Once GERD is finished, and other hydropower projects including the 1,870-megawatt Gibe III are on line, Ethiopia may earn $2 billion a year from the exports, he said.

The construction of GERD is opposed by Egypt, which says it will reduce the flow of the Nile, the world’s longest river that provides almost all its water. Egypt’s opposition to the project blocked Ethiopia’s access to foreign credit, he said.

“The only option on the table was to construct the dam by our own capacity,” Zadig said, adding that the state-owned Ethiopian Electric Power Corp. and public contributions would fund the rest of the project.

Sudan, the other affected nation, supports the project that’s scheduled for completion in 2018, partly because it will allow the country to import cheaper Ethiopian electricity. The dam is being built 18 miles (30 kilometers) from the Sudanese border on the Blue Nile River, the main tributary of the Nile.

Two turbines at the plant will start producing 750 megawatts of power during the Ethiopian calendar year that begins Sept. 11, depending on rainfall patterns, Zadig said.

In 2012, Ethiopia invited an international panel of experts to study the project, which the government says will help curb flooding and improve water storage.

The panel concluded in June that further assessments need to be made on GERD’s regional impact. It also advised modifications to the design to strengthen it structurally. Efforts by Ethiopia, Egypt and Sudan to form a committee to oversee the probes on the downstream effects have reached an impasse over the role of foreign experts.

Egypt wants construction paused while the studies are done on an issue that is a matter of “national security,” Badr Abdelatty, a spokesman for Egypt’s Foreign Ministry, said in a phone interview on March 15.

“We ask upon the other side to be serious and to move forward to accept having international experts imported to assess the impact,” he said. “Also for Ethiopians to provide more studies, more statistics.”

Ethiopia should also respect colonial-era agreements and a 1959 accord between Sudan and Egypt that allocates all of the river’s flow excluding evaporation to those two nations, Abdelatty said. By 2020, Egypt will require all of its assigned 55 billion cubic meters a year for vital use such as drinking, washing and sanitation, he said.

To contact the reporter on this story: William Davison in Addis Ababa at wdavison3@bloomberg.net
–
HAN & Geeska Afrika Online (1985-2014), The oldest free independent Free Press in the region, brings together top journalists from across the Horn of Africa. Including Ethiopia, Somalia, Eritrea, Sudan, Djibouti, South Sudan, Uganda, Kenya, Oromo, Amhara, Somali, Afar and Harari. Plus, we have daily translations from 150 major news organizations in the Middle East and East African regions. Contact at news@geeskaafrika.com