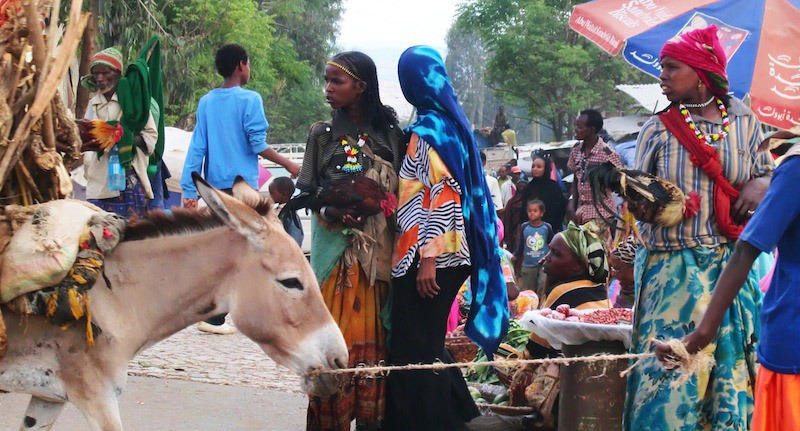 HARAR (HAN) March 17th, 2014 – Ethiopia is a largely agricultural nation of 94 million people that endures frequent droughts and famine, with a per-capita income of a bit more than $100 per month. Is it ready for KFC chicken outlets?

The future KFC in Ethiopia has reasons to be optimistic: It already operates in a dozen sub-Saharan African countries, including at least two, Malawi and Zimbabwe, that are even poorer than the current Federal Ethiopia.

The companies behind these global brands think it may be. Amsterdam-based Heineken (HEIA:NA) is scheduled to open a $127 million brewery in mid-2014 on the outskirts of Ethiopia’s capital, Addis Ababa. Unilever (UN), the British-Dutch consumer-products giant, announced plans this month to open a factory near Addis Ababa that’s expected to produce detergents such as Omo. Louisville-based Yum! Brands (YUM), which owns KFC, is also considering a move into Ethiopia.

As Africa’s second-most-populous country, behind Nigeria, “Ethiopia is the one that stands out,” Bruce Layzell, Yum’s general manager for new African markets, told Bloomberg News. “We don’t want to go to a country where we can only build four or five restaurants,” he said. “We want to go in and build 50, 100. Our business is the scale game.” Besides the size of its population, what attracts multinational consumer groups to Ethiopia is robust economic growth, averaging 9.3 percent over the past four years, according to the International Monetary Fund.

As in Vietnam, “we’ve taken a long-term investment decision in Ethiopia,” Dougie Brew, Unilever’s head of corporate affairs for Africa, told Bloomberg. Unilever plans to develop a “comprehensive consumer-goods manufacturing business,” he said, as well as a network of Ethiopian suppliers and distributors.

In Ethiopia, Even if they can afford beer and soap, do Ethiopians really have enough disposable income to dine out regularly? Yum’s Layall admits the company is “nowhere near pushing the go button” for KFC in Ethiopia. “It’s still at that explore stage, to find the right partner, to see if the business model will work.”

Heineken made its first big move into Ethiopia in 2011, when it acquired two state-owned brewers, Harar and Bedele, for $160 million. The new brewery scheduled to open this summer will produce Harar and Bedele as well as Heineken, according to local HAN & Geeska Afrika Online business reporter in Harar.