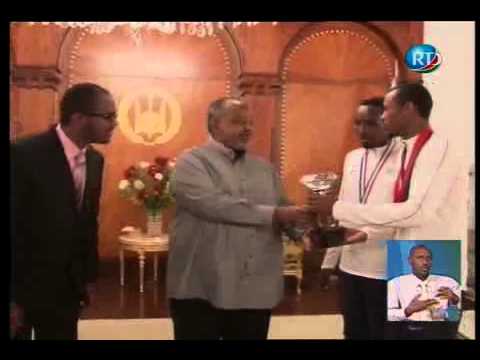 Djiouti (HAN) March 14, 2014 – Djibouti’s Ayanleh Souleiman fulfilled the promise he’s shown in recent years as track and field’s newest mid-d star with a brilliant gold medal run of 3:37.52 in the men’s 1500 final at the 2014 IAAF World Indoor Championships. Despite many experts viewing this race as a wide-open affair, Souleiman ran as a heavy favorite would – controlling it from the front, leading almost uninterrupted from the start to the finish.

Souleiman claimed gold in 3:37.52 as Ethiopian Aman Wote, who ran right behind Souleiman for much of the race and briefly took the lead as he made a bid for golden glory with just over 300 meters remaining, ended up a deserving second claiming his first global medal in 3:38.02. Defending champion Morocan Abdalaati Iguider of Morocco took his third straight World Indoor medal (he also won silver in 2010) in 3:38.21 – ahead of Kiwi Nick Willis who was fourth on the track in 3:28.47.

Djiouti (HAN) March 14, 2014 – The President of the republic of Djibouti Ismail Omar Gelleh has acclaimed the Djibouti’s 2014 gold medallist Ayanle Souleiman at a colourful ceremony in the capital Djibouti on Thursday. The 21 year old athlete made a strong exhibition at the 1500 meters race at the recent world indoor championship in Poland leading the final event almost from the very beginning until the end.

President of the nation his excellence Ismail Omar Guelleh received the athlete and his coach Jama Mahmoud Aden in a ceremony during which the young athlete was awarded with a luxury car and as well the promotion of his military rank marked a major encouragement for the young age player.

Ayanle’s Coach Jama Mahmoud Aden popularly known as Jama ‘Karaaciin’ said that it was a great publicity for the entire Djiboutian people and as well as for him to have Ayanle climbed on top.

“My Athlete dominated the whole race from beginning until the end, he showed professional performance, talent and endurance—I am fully hopeful that Ayanle will have scored such major gains in the near future” coach Aden said in an interview with VOA Somali service on Friday.

Ayanle who joined athletics in the aftermath of 2008 Beijing World Olympic Games now eyes on the 2016 Rio De Janerio Olympic Games and has high hopes of winning a gold medal from Rio with almost 36 months to go from now.

Be the first to comment on this Article, This conversation is missing your voice. Please join HAN & Geeska Afrika Online reporters (1985-2014)