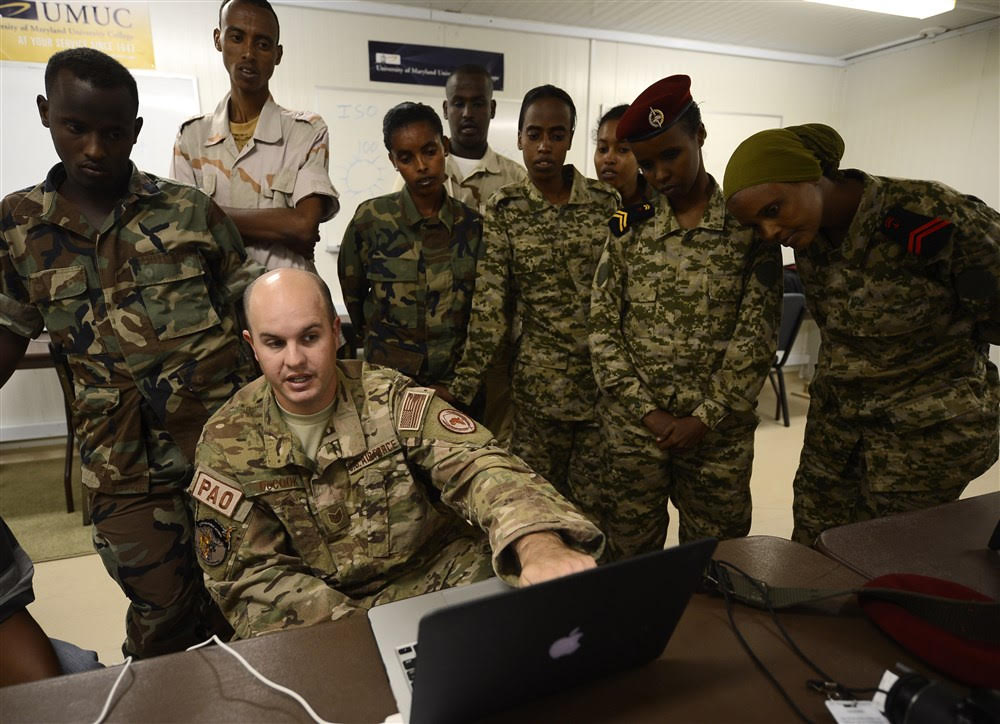 The leaders convened with the intent of sharing their professional advice and networking with influential military figures from the host nation. “We’re here for leadership development,” said U.S. Army Command Sgt. Maj. Butler Kendrick, CJTF-HOA command senior enlisted leader. The visit consisted of several briefings, a meal at the military dining facility and a base tour.

“We do what we can to ensure they have the skillset and capability to provide what they can for their country without us being by their side,” Kendrick said. “In the long run, we enable our partners to protect and defend their country without needing the assistance of coalition partners.” The main focus of the briefings was the current situation in Somalia and the African Union mission there to neutralize Al-Shabaab and stabilize the country.

“We received knowledge about the region and more information that we didn’t have before,” said Sgt. Maj. Ibrahim Yabeh, a FAD senior enlisted leader. “We’re very grateful to participate and share the information.” Along with providing important information, the partnerships built and strengthened between the leaders is also vital for ensuring mission success. “If we show them how things are done by [U.S. forces], it’s up to them to take information back to use in their military, their culture and their country,” Kendrick said.

Kendrick emphasized that visits like these are important to the development of U.S. and coalition partners’ military leaders. Key leaders share best practices and attendees are encouraged to implement what they want amongst their forces. “Developing as leaders is why we’re here,” Yabeh said. “I’m excited to give my people all the information I’ve learned, and I hope the sharing of information and culture will continue.” Source: hornofafrica