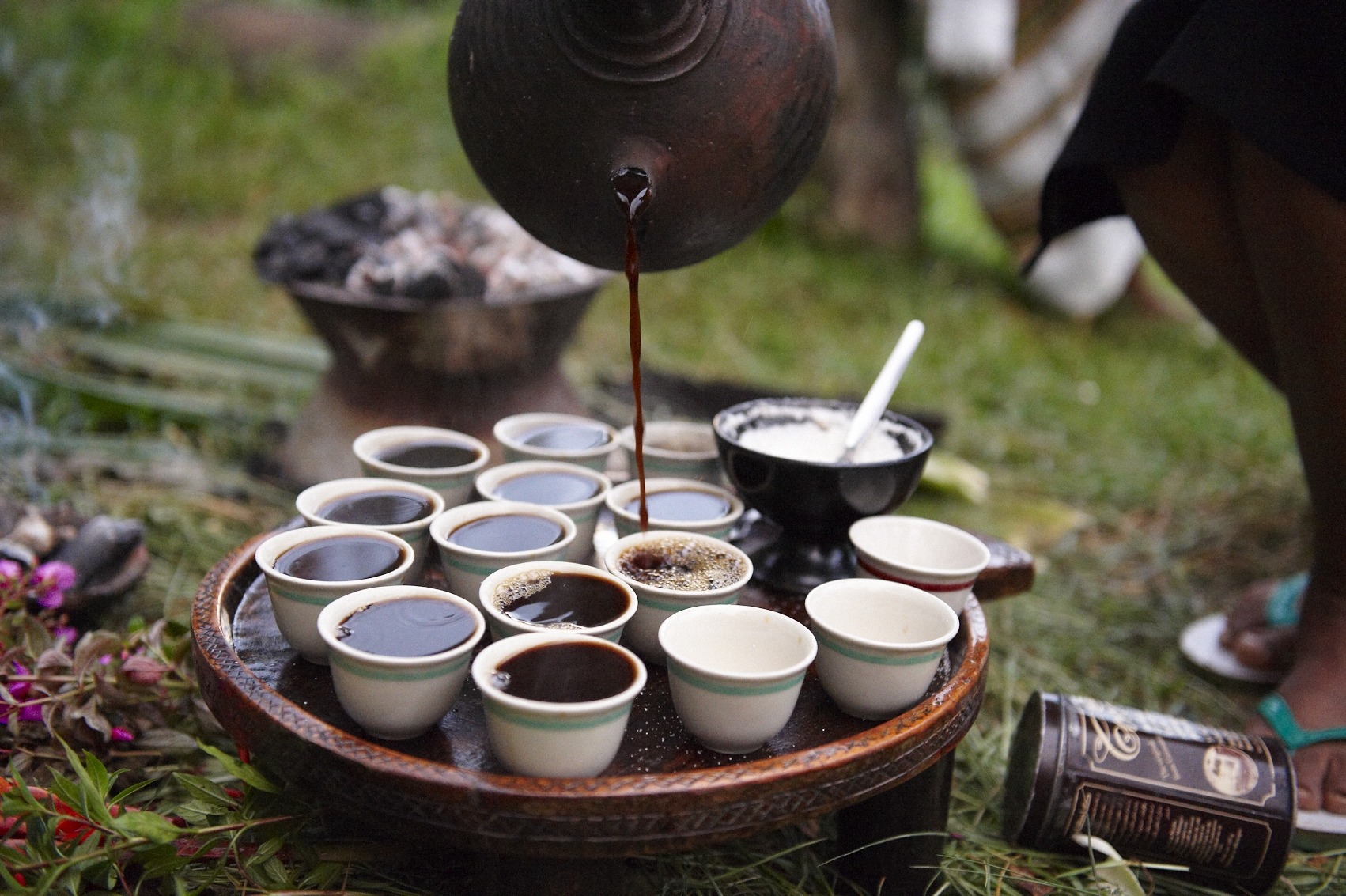 ADDIS ABABA (HAN) November 9, 2015. Public Diplomacy & regional Security. Ethiopian coffee, long representing close to 30% of the country’s foreign exchange earnings, is suffering from neglect by a government that prides itself with achieving more than 10% GDP annual growth. Fifteen million Ethiopians, 20% of the population, depend on coffee production and coffee-related activities, and coffee is cultivated by close to 3.8 million smallholder farming households. But to understand the state of Ethiopian coffee today one will have to imagine Switzerland without its banks and its watch makers.

Production of the green Arabica bean in the country is almost exclusively situated in the two regions of Oromia and the Southern Nations, Nationalities and Peoples (SNNPR). Figures also show that the country is the leading producer in Africa of this variety and in 2014 was the seventh largest supplier of green beans in the world. In 2014, Ethiopia earned almost US$889 million in export of raw coffee, which represented around 26% of its total export earnings. But these figures hide an inglorious story.

Between 2000 and 2014, the coffee harvested area doubled from 250,000 hectares to 520,000 hectares. Approximately 460,000 hectares of this is found in Oromia regional state. A number of factors explain this dramatic speedy increase in coffee cultivated area none of which correlate to a greater attention to the crop. Population growth is of course a major factor since in the same period the number of Ethiopians went from 67 million to over 90 million.

Deforestation is another main cause for the expansion in size. Various sources put the rate of deforestation at differing degrees of alarm due to poor baselines. “However, despite the slightly different estimates for deforestation in different regions of Ethiopia – given deforestation rates remain the same and the country will have lost its last tree of high forests within about 27 years – with it will go the world’s only original wild populations of Coffea arabica.” And in monetary terms, the economic loss of that genetic resource ranges between US$0.4 and 1.5 billion per year, according to FAO.

Of course deforestation is closely linked to security in land tenure; studies have time and again demonstrated that state ownership of land is a disincentive to land conservation. Coffee, a shade loving crop, bears the blunt twice as hard as a growing population puts pressure on the natural resources by spreading out the production area, leaving only a minimum of trees and destroying the biodiversity which had kept the Arabica variety resistant to diseases and droughts for hundreds of years.

In addition, coffee trees do not begin to produce full yield until their sixth year even if they continue prime production for about ten years. Such long term cultivation is only possible with secure land tenure. Left without title deeds to their land over the past two decades, smallholders had uprooted thousands of hectares and with it vast forest covers in favour of short term food crops. Recent efforts initiated by NGOs and only later taken by the government to provide what is known has “green papers” have been able to curb the alarming deforestation rate but the ecological damage will last for many more decades.

Such unplanned and wrongly executed growth in coffee production area has only managed to result in the proliferation of small holdings with nearly no increase in volume of coffee produced. In fact Ethiopia remains the seventh supplier in the world market and its share thereof is stagnant at just three per cent. So any increase in amount of export earnings is due to external factors linked to changes in international prices and not at all to improved production. And this contradiction is explained by the yield.

Within fourteen years since 2000, the yield decreased by over 4000 hg parachuting from 9200 hg/ha to just 5100 hg/ha. Put against the growth rate of cultivated land mass this amounts to a rate of loss in yield of 1,6% per each hectare.

Arabica is a very finicky variety and grows best at high altitudes in rich soil. There is very little research in Ethiopia on soil quality to allow a good overview of the loss in yield due to lowering quality of soil. However, a clear correlation can be made with the increasing patchiness of the vegetation.

Alongside droughts and other natural causes, the poor agricultural practice of coffee growing smallholder farmers is exacerbating the situation. A lack of erosion protection, excessive nutrient removal and improper use of fertilisers impair soil fertility. This causes soil to be more easily washed away or blown away by the wind – nutrient stores and humus are lost, reducing soil quality. Each year, an estimated 30,000 hectares of soil are lost from all of Ethiopia.

This brings us to the heart of the problem. Ethiopian coffee today is left in the hands of too many but at the same time no strong players. As mentioned earlier 95% of the coffee producers are smallholders. Large coffee holdings only represent less than 7000 hectares. In terms of productivity these are in no better situation. Since the dismantling of the Coffee and Tea Authority set up by the Derg regime, the overall supervision of the sector has been left practically in the hands of NGOs and cooperatives with no harmonized and even contradicting policies and visions. There is only one under-resourced and nearly unknown public institution at the federal level for coffee called the Ethiopian Coffee Plant Organisation and its mandate is quite limited if clear at all.

The large and complex structure of the Ministry of Agriculture which counts three state ministers, 20 directorates and nine accountable institutions does not have one structure for the crop which makes up more than 25% of its foreign exchange earnings. Since the relaxation of the rules allowing for the establishment of cooperatives and cooperative unions (due to the fall in international prices) four exclusive Coffee Farmer Cooperative Unions were established of which the Oromia Coffee Farmers’ Cooperative Union is the largest with 311 cooperatives representing 288,201 members.

Hence the majority of growers remain outside unions and even outside cooperatives. But the Cooperative Unions themselves indicate that they are challenged with lack of finance and inadequate access to risk management services, low levels of production and productivity, limited agro-entrepreneurship skills and inadequate organisational and management skills at primary cooperative level. Extension services which the government says is expanding and one of its priorities are neither adapted nor offer specialised services for the coffee sector. While public spending on agricultural research (including Official Development Assistance) was estimated at US$18.8 million in the three years between 2005 and 2007 for example, the share of coffee research is nearly non-existent – less than 0.2%.

In a study undertaken in 2013, among the solutions proposed (important to note here that less than 10 pages were dedicated to solutions in this 80 pages study) none involve the Ethiopian Commodity Exchange. In fact the ECX has not impacted production and value chain processes as a whole and may even have contributed to creating problems.

Firstly, the ECX has only managed to add the number of middlemen between farmer and export. Secondly, due to a multiple number of reasons related to warehousing, grading, conflict resolution mechanism, and poor infrastructure, there is “widespread distrust of ECX among the trade, regarding grading and underweight, and a perception that the authorized channels of complaint and redress are not fully effective”.

The rate of “coffee flight”, or coffee traded through unsupervised black market channels is impossible to measure but is still high. Just three weeks before going to print, nearly 10,000 quintals of coffee were seized at the border for example. This results in the decrease of the average value of the officially traded coffee.

It is easy to get into a depressing enumeration of the multi-faceted negligence which Ethiopian coffee is suffering from. But none of the figures shown above depict the state as much as the following. Various studies cite slightly differing percentages of the amount of coffee sold in the domestic market. (In fact this also shows the extent of the investment in data and research put in coffee.) But the figures are between 50 and 60% of the production.

There are some 10 (washed) coffee classes, as the quality grades are called, and are graded between 1 to 9 as well as an Under-graded category. Only the top 6 grades are exported while the rest are reserved for domestic market. This means that the largest production concerns coffee of the lowest classes. Consider further figures. Up to the year 2000 Ethiopian coffee used to be among top 20 coffee price earners.

By 2014, its coffee price has been thrown out of the top priced league. By a comparison, the United States, which produces less than 3 million tons of coffee per year, earns four times as much as Brazil, the coffee of which is the second highest priced. Therefore even by exporting its top class coffee Ethiopia’s coffee is priced very low. This relates to the problem of lagging behind the increasingly competitive and refined international coffee industry. This in turn has little to do with highly publicised coffee trademark issue – or only very remotely.

First it is about belonging to international specialty coffee markets – fair trade, organic, Rainforest Alliance are some of which with the possibility of double and triple certifications. Of the more than 311 coffee farmers who are members of the Oromia Cooperative Union, for example, only 41 have such certification with only 18 who have double certification (fair trade and organic) and just 6 with triple ones. It is true that the benefits of certifications for farmers is debatable but the net contribution to improving quality, productivity, sustainable use of natural resources and in particular international competitiveness is not.

In Brazil, for instance, the international certification is more than 80% and the country has now moved on to farm by farm specialty coffee production- which involves a much more rigorous quality checks. International pricing also relates to degree of processing- the higher the supplier in the more or less ten levels of coffee production (from crop to cup) the greater the resilience to price fluctuations. Ethiopia, after years of coffee production history, still exports green coffee beans- roasted coffee amounts for less than US$200,000 in earnings. If the Ethiopian economy has, as the latest World Bank Ethiopia report claims, now counts an expansion of the “manufacturing” sector, it certainly has not benefited the coffee sector.

A real transformation of the Ethiopian economy will result in the enhancement of the coffee value chains – in terms of being small holder inclusive, upgrading the quality of production, improving productivity and even in the creation of rural non-farm jobs for the youth around coffee. Columbia for example exploits the coffee industry to the maximum with entire other industries such as tourism built around it. In the past 14 years when Ethiopian coffee was dying Vietnam went from producing just 900,000 tons in 2000 to becoming the world’s second largest exporter and third highest priced in the world.

Ethiopian coffee is quickly on the verge of becoming as fantastical as the legend of the story of the discovery of coffee. Its story in effect mirrors that of the Ethiopian GDP growth- an increase in size which does not translate in quality or in productivity. While the producers remain smallholders and the sector remains in the hands of small good will hunters it is difficult to imagine its bright future.”