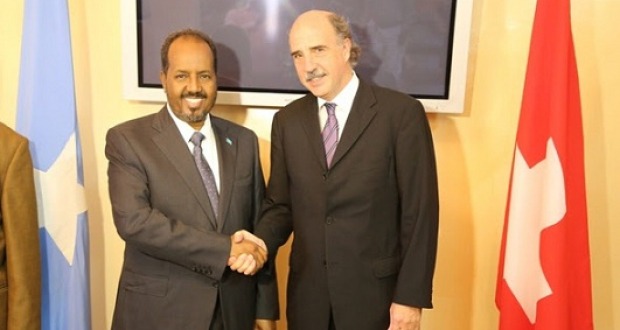 A Swiss delegation made the promise during a meeting with the Somali Deputy Prime Minister Mohamed Omar Arte in Mogadishu on Wednesday. The Swiss team was led by the ambassador to Somalia, Mr Dominik Langenbacher, and included a federal affairs expert, Prof Kurt Nuspliger. “Since Somalia has chosen to rebuild its statehood by a federal system, we need to pick the most suitable type for the country,” reads a Somali government statement issued on Thursday. The Swiss and the Somali sides discussed the various federal systems and the five pillars that support them. Mr Langenbacher underlined that his government selected a team of experts to help Somalia to chose the most suitable federal system.

“We assigned a panel of experts, hoping that the team will come up with the best manner Somalis can govern themselves,” said the Swiss envoy. “We will provide the financial support for the implementation of the federal arrangement,” added the ambassador. Mr Arte thanked the Swiss delegation for helping to establish the best governance for the Horn of Africa nation. “My government, in collaboration with other state institutions in Somalia dealing with governance, will evaluate every suggestion in order to find the best method,” he said. Since the collapse of the dictatorial regime, following rebel victory in 1991, Somalis have been searching for a suitable government system. A number of regional administrations have been established to be part of the wider federal republic, but the arrangement remains fragile. africareview